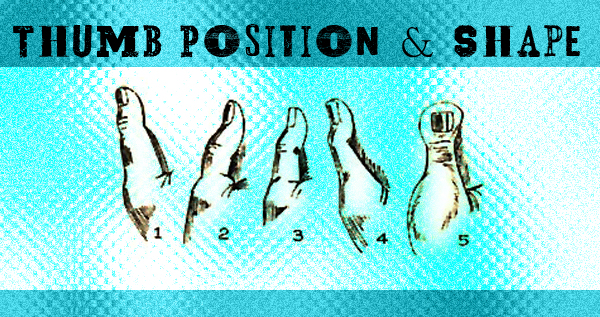 Much can be read into the position of the thumb — where it sits in the hand. According to The Study of Palmistry, the following qualities can be determined by where the thumb is situated on the hand 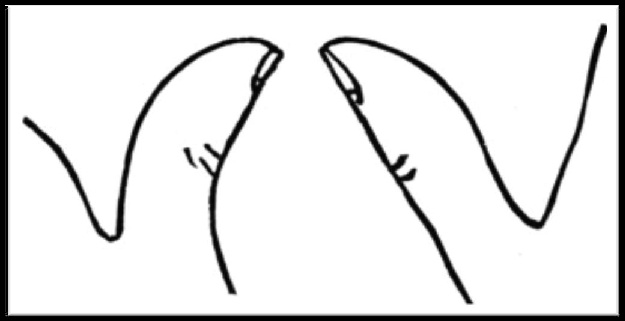 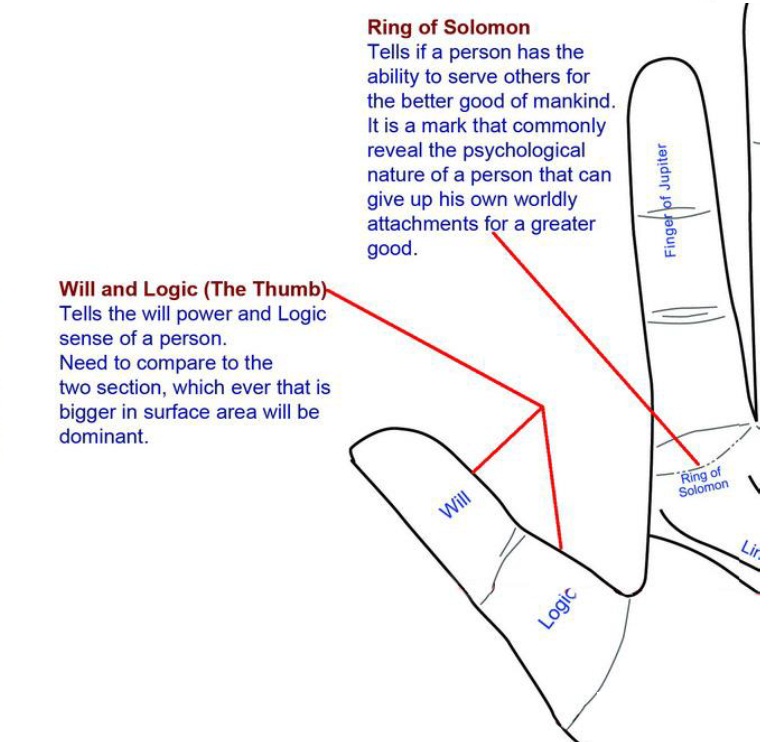 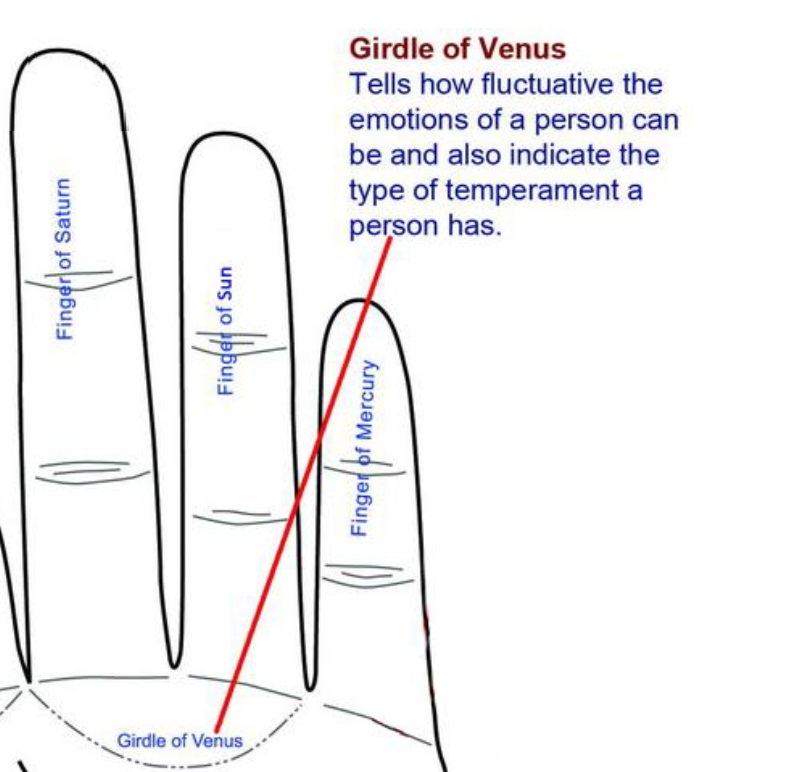 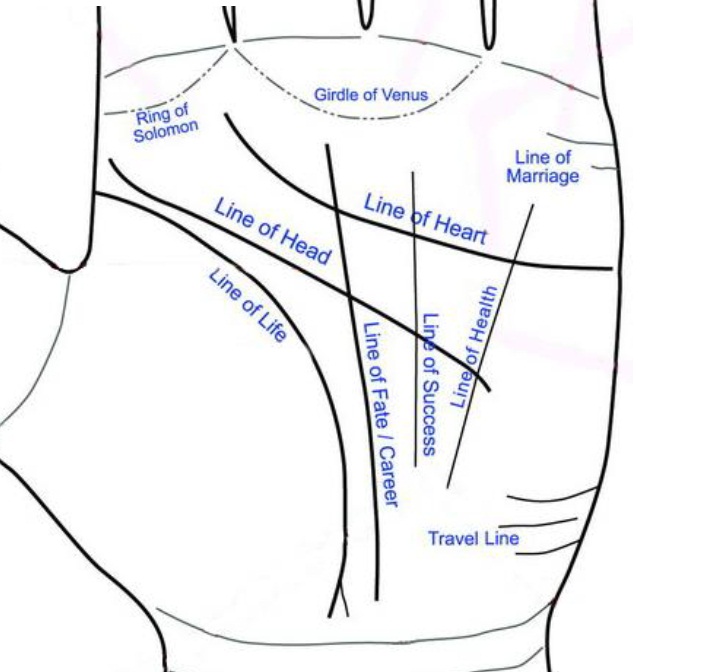 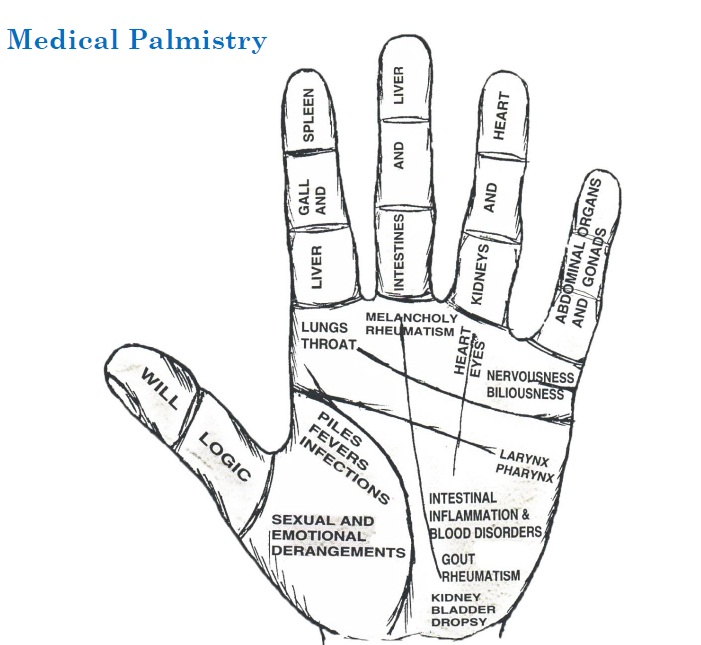 Too high: Denotes idiocy (especially if the thumb is also short and ill-shaped.)

Normal: No specific meaning; the meaning can instead be derived by the size and shape of the thumb.

Close to the fingers: Avarice (Extremely Strong desire for money and possessions).
Away from the fingers: Spendthrift disposition 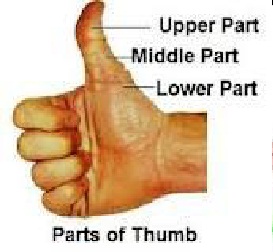 Thumb Size: The size of a thumb can also spread light on the personality of the individual. People with very long thumbs live in their heads and can be stubborn, while those with short thumbs are said to be weak-minded. On the other hand (sorry about the pun!), long thumbs show an ideal mix in the capacity for thought and action.

Very long thumbs: If the bearer bears very long thumbs, he or she is said to be governed by the head rather than the heart, and to be obstinate and not always wise.

Long thumbs: The subject is his (or her) own master here. Fine capacity for thought and action are denoted here.

Large thumbs: People with large thumbs are governed by their heads (source of all feelings of exclusiveness), and are more at ease in an atmosphere of ideas, rather than in one of sentiments. They judge things better by reflection than by acting on the spur of the moment, as it were — on the moment’s spur…

Large thumbs with smooth fingers, conical at the top: Success in art of literature is reached by method, and logical deduction, not intuition.

Large thumbs with square or spatulate fingers:Love of action but lack of proper reasoning.

Large thumbs with knotty fingers or spatulate tips:Reason has the upper hand (pardon the pun) in all of the subject’s undertakings, all of them; in fact, he/she lacks all impulsiveness, all intuition and at times even lose himself/herself in complicated combinations that never come to pass.

Very short thumbs: The subject will be carried constantly from one extreme to another.

Small thumbs: People with small thumbs are governed by their hearts (source of all tolerant feelings), and are more at home in an atmosphere of sentiments than one of ideas; they appreciate the world more from a rapid cursory survey, than upon reflection. It is easier for
large-thumbed subjects to overcome their native tendencies than it is for small-thumbed people. Generally speaking, a thumb which is small, mean and poorly formed announces an irresolute mind, and a wavering disposition in those things which are usually the result of reasoning power, and not the result of sentiment and instinctive knowledge.

Small thumbs with smooth fingers: Talent or at least an aptitude for one of the fine arts or Literature.

Small thumbs with conical fingers: The aforementioned talent aims to a high ideal.

Small thumbs with square or spatulate fingers: The talent the bearer is gifted with, is one which lies in a clever rendering of real life.

Small thumbs with square and spatulate fingers: The talent will be totally in the line of science and business.

Thumb Shape: When it comes to studying the thumb, palm-readers usually focus on the shape. For example, is the thumb thick (perhaps denoting primitive tastes and uncouth ways?) Flat thumbs indicate meanness and a nervous disposition. By contrast, broad thumbs can show a violent temperament and if you have a slender thumb it might mean you an artistic genius! Here is what Comte C. De Saint-Germain has to say about the impact thumb size has on the personality: 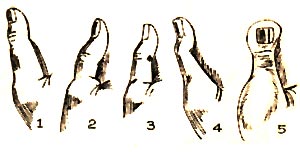 Broad thumbs: Violent outbursts. If the thumb is also short, it could indicate fits of stubbornness that do not last.

The First Phalanx: On a more specific note, let us consider the first phalanx (tip) of the thumb and what the shape of this part of the thumb represents.

Spatulate phalanx: If your thumb’s first phalanx is spatulate in shape and long, your will could be compared with that of a field commander. If the said spatulate first phalanx is short, however, it will leave the chief of an expedition in the lurch for lack of quick determination at the right time. (Whatever that means!)

Clubbed phalanx: If the first phalanx is broad, thick androunded, it represents an aspect of the classic Murderer’s Hand

Slender phalanx: Refined
in action. If long, the bearer will have recourse to the most courteous means to success in whatever they resolve to do. This is an aspect of the classic iron hand in a velvet glove.

The First Phalanx Size: This is how the size of the first phalanx of the thumb impacts upon the disposition

Knot between The Phalanges: The existence of a more or less pronounced knot on the joint between the first and second phalanges modifies the above readings, according to the learned Comte C. De Saint-Germain. He writes: “It must be remembered that this single knot corresponds to the first (or upper) knot on the fingers; it increases,therefore, the reasoning power of the second phalanx and reduces the intuitive quality of the first phalanx.

Broad and long second phalanx: This person has a good understanding of material things.

Broad and short second phalanx: A primitive type of intellect is indicated here.

Thick and clumsy second phalanx: Another indicator of primitive intellect and a lower grade of brain.

Warped or waist-shaped second phalanx: Quick, sharp, brilliant intellect shown, as well as a love of all things intellectual.

The Second Phalanx Size: That’s the shape of the second phalanx considered; but how about the size?

A very long second phalanx: This person is the kind who discusses everything to death, and trusts absolutely nobody and nothing. Also paradoxical to a degree.

Very short second phalanx: The bearer of this thumb lacks even the simplest common sense, and hates to think before acting.

No Third Phalanx: According to Comte C. De Saint-Germain, despite is conceptions; there is no third phalanx of the thumb. Saint-Germain wrote: “the falsely so-called third phalanx is in reality the Mount of Venus, and should be studied under that name.

Combination of the Phalanges: In normally shaped hands the proportion between the first and second phalanges is 2 to 3. In other words, if you measure a thumb from its base (or lower knuckle) to the tip, the first (or nailed) phalanx comprises two-fifths of the total length, while the second phalanx should make up the remaining three-fifths. Deviations from this norm can be considered as revealing as personality.

The two phalanges work together synergistically to produce the following results:

Very long first phalanx + short second phalanx: Recklessness in thought and action indicated. Will power is out of the control of reason.

Very short first phalanx+ long second phalanx: The people with these thumbs are said to be talkers instead of doers. Good reasoning skills, but poor execution skills.

The Murderer’s Thumb Unveiled: The clubbed thumb (see picture) was traditionally called the “murderer’s thumb” denoting the powerful temper of those who carried it. This thumb has a short first phalange (section) and is broad. The tip of the thumb is fleshy and the thumbnail is short and broad. According to those who know, people with clubbed thumbs are strong willed and can control their emotions.

Paul Fenton-Smith says: “In almost every case of clubbed thumbs I have seen the person has not lost his or her temper more than five or six times in 30 years. In most cases this person knows on a deep level what he or she is capable of doing when out of temper, and is sensible enough to leave the circumstances which triggered the outburst of temper before doing something which will cause regret. If a crime such as murder is committed, it is likely to be an unplanned affair after the person has “snapped”, temporarily losing control over his or her emotions.” Since my new friend C. has this kind of thumb (pictured below), I want to test out Paul Fenton-Smith’s theory, and see whether she does indeed have an iron control of her emotions.