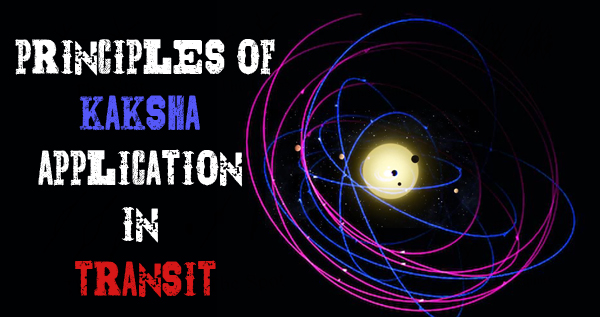 1.         When a planet transits a sign having high number of bindus in its own Bhinnashtaka varga, indicates that the time has come for the fructification of the result pertaining to the house corresponding to that sign.

Example: When Jupiter is transiting over Sagittarius and it has 6 bindus in Sagittarius in its own Bhinnashtaka varga, which is corresponding to the 4th house of a native, then the native may be bestowed with the near best results pertaining to the ‘house’ during the sojourn of Jupiter over Sagittarius.

2.         A further narrowing down of time of fruition of a promise in the horoscope is found by noticing the Kaksha in which the planet is travelling. If the Kaksha lord has contributed a bindu in the Bhinnashtaka varga of the planet in that sign, then the auspicious results of the house corresponding to that sign will take place.

Example: Saturn was transiting over Sagittarius at 8*20*30* having 4 bindu in Sagittarius in its own Bhinnashtaka varga. Thus it was traversing in the 6th Kaksha.

i .e., Mercury’s Kaksha. Mercury has contributed a bindu in Sagittarius in Saturn’s Bhinnashtaka varga.

3.         When more than one planet is simultaneously transiting the Kaksha of planet that have contributed bindus in the respective Ashtaka Vargas, increasingly good results may be predicted.

Conversely, watch out the period when simultaneously, several planets are passing through the Kaksha, the lords of which have not contributed a bindu. Such a period can be devastating, especially if the dasha is unfavorable.

A. Due to its Karakatwa, e.g. Sun for father, spiritual matters, personal influence or royal favors.

B. Due to location from lagna at the time of transit

C. Due to location from the Kaksha lord’s natal position as reference, e.g., Saturn transiting over Sagittarius in the Kaksha of Mercury is 9th from Mercury since the natal placement of Mercury is Aries. Thus, this transit of Saturn would cause results pertaining to the 9th house, the house of fortune.

5.         When the transiting planet and the Kaksha lords are friends, e.g. Saturn & Mercury, results are good.

6.         The transiting planet yields increasingly good results if it visits its friend’s sign, its own sign, its mooitrikona sign or its sign of exaltation. This is one of the fundamental principles of transit, which is useful with or without the application of Kaksha or Ashtaka varga consideration.

7.         Though the concept of planets transiting in different Kaksha applies to all planets, yet in practice, the analysis is more useful for slow moving planet like Saturn and Jupiter (one may take Rahu also). Average time taken by planets to transit a Kaksha is approximately:

8.         SADHE SATI: Kakshya concept has an illuminating bearing on delineating the results of Sadhe Sati – that dreaded period of Saturn’s transit in the 12th, 1st and 2nd house from the natal Moon. In its entire sojourn over the signs, whenever Saturn passes through the Kaksha of a lord who has contributed a bindu in Saturn’s Ashtaka varga, the results are favorable, otherwise not. In other words, if the relevant houses have 6, 7 or 8 bindus each, the results of Sadhe Sati, instead of being adverse, will be extra-ordinarily good, especially so if the Sarvashtaka bindus in the same houses are high say, of the order of 33, 36 or 40. The nature of results will be influenced by rule nos.4c, 5 and 6.

10.        Dasha lord’s transit: For more pointed timing of events, find out which Kaksha, the dasha lords have obliged by contributing a bindu or not in the sign being transited.

When natal analysis and transit analysis both are positive, very good results of the dasha may be expected. For close timing of events the principle may be extended to Pratyantar and sookshma dasha lords too.

11.        A native leads a smooth life with few ups and downs if majority of the planets in his nativity are in Kakshyas whose lords have contributed a bindu in the Ashtaka varga of the planet concerned.

This is a corollary to the previous rule and act as a criterion different from all criteria applied to judge the horoscope.

However, it should not be construed that a person who has smooth life necessarily would have high life or would occupy high positions in life. Often the lives of prominent men and women are full of sharp ups and downs and they face tragic events in their personal lives. The high level of life will depend on high bindus at the right places.